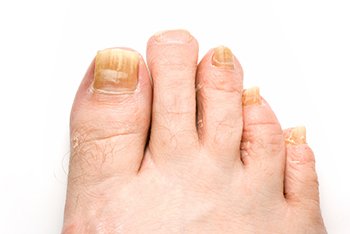 Toenail fungus, medically known as onychomycosis or tinea unguium, is a very common infection of the nail. Nearly 3 million cases appear every year in the United States. Initially, toenail fungus may present itself as white spots on the nail or black spots underneath. Ridges will typically start to form and the nail will seem rougher to the touch. As the infection progresses, the nail may thicken, become brittle, discolored, or misshapen. The growing fungus separates the layers of keratin in the toenail, which leads to the characteristic distorted look. The white spots you notice on your nail are displaced keratin that has begun to build up.

Toenail fungus is notoriously difficult to cure with over-the-counter medicines. From foot soaks to ointments the efficacy of these is extremely varied, at best. However, in late 2010 the FDA approved the PinPointe FootLaser. This was the first of the “cold laser” treatments to gain federal approval. The laser kills the fungus in and under the nail, ridding it of the infection.

The treatment itself is non-invasive and very straightforward. The podiatrist will move the laser in a grid-like pattern over the infected toenail. This is a virtually pain-free procedure that generally takes less than 30 minutes, though it could take longer depending on how many nails are infected. After the procedure, the appearance of the nail will not have changed. While the fungus has been killed, the nail will have to grow out in order to see the effect of the treatment.

Laser toenail fungus treatments are now used all over the world and can be performed by a podiatrist in-office. The number of treatments it will take to cure the fungal infection varies by patient and type of laser. Speak with your podiatrist to learn more about getting rid of your toenail fungus.